Boost the Capability of Hot Forming with SEYI Servo Press


Shieh Yih Machinery Industry Co. (SEYI), a leading world-class servo press manufacturer makes the significant progress in the servo press industry in hot forming application and has received orders from large manufacturers of automobile parts from Japan, the United States, and Europe. Even though some have pointed out the effectiveness of hot forming process using the hydraulic servo, SEYI is confident in using the dedicated technology. Its capacity may exceed 30% higher than the hydraulic press, which can improve the quality and drastically reduce power consumption. The Company has already invested many resources into high-tensile steel forming and the Internet of Things (IoT).

In 2011, SEYI began to redirect its business from small generic stamping presses to servo presses with high added value. Although the company hasn’t been in the field of servo presses for long, the company has already received orders from large manufacturers of commercial vehicles based in Europe, plus medium-sized presses for progressive processing use (capacity of 800 tons, 400 tons). SEYI also offers a large manufacturers of car parts based in Germany a 600-ton press for progressive processing use. Its performance is amazing. The company has also made some great achievements, receiving orders of an ultra-huge tandem line from some exterior board forming requests such as the canopy and the car door.

Among all the cases, there is one case regarding the progressive processing of a large manufacturer of commercial vehicles based in Germany. That is to change the decision from the original press made in Germany to the press produced by SEYI. For manufacturers based in Europe and Japan that have a selling point of the press with high added value, no one can ignore the presence of SEYI Machinery. The SEYI servo press adopts the “direct drive” structure. The turning force forms the input of the servo motor and can be directly transmitted to the drive part. This reduces wear and tear on the torque, which helps to increase the capacity and reduce power consumption. Besides, the servo motor is also a kind of technology for differentiation. 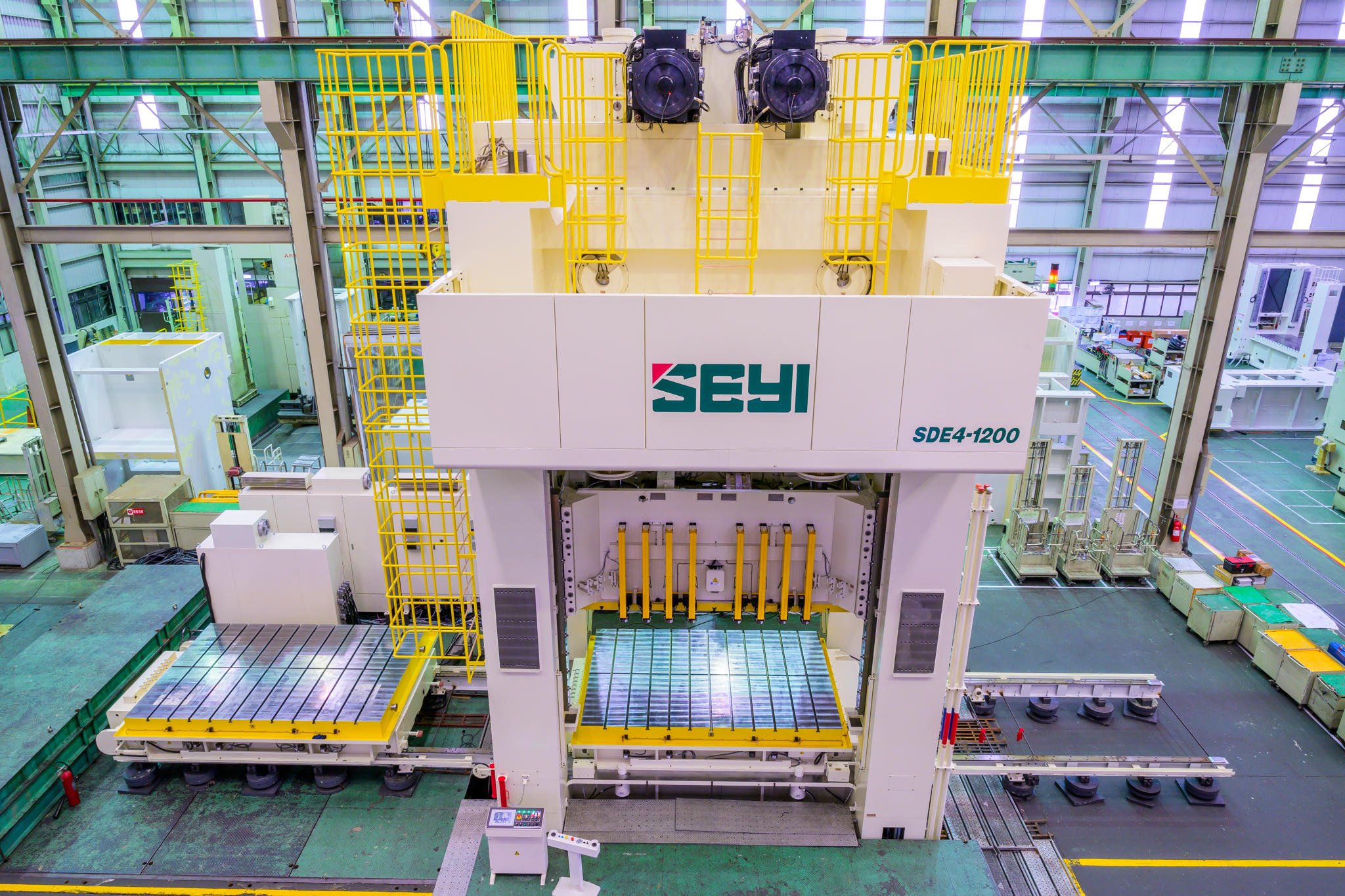 Servo Hot Forming can Speed up from 3SPM to 6SPM

Hot forming is a type of stamping method that effectively carries out lightening of automobiles and provides security. It was not only adopted by the automobile industry based in Europe, but also the Japanese automobile industry chose to follow up on the trend. SEYI has mainly received orders of multiple hot forming lines from European enterprises and Japanese Automobile Parts Tier1 manufactures.  The Chairman and CEO of SEYI Machinery Claire Kuo said, “We have many clients who have called us for help.” Even though hot stamping application used to be considered as less advantageous than hydraulic servos in terms of the mechanical structure and price, SEYI has proposed the servo press plan to its clients. I would say that is why the servo press was selected to be used for the hot forming.

Compared to the hydraulic press, the use of servo presses produced by SEYI to carry out hot forming application may have generated three effects—improved capacity, increased quality of product, and cost reduction due to energy saving.  The Manager of the Servo Technology Department KC Hsu said, “The hydraulic production speed is counted as 3-4 SPM (Strokes Per Minute), and the servo production speed can be expected to reach up to 6 SPM.” The capacity can increase up to 20-30%, which overturns the impression on the main issue of lower capacity resulting from hot stamping as compared to cold stamping.


What about the contribution to its quality? When hot forming application has undergone processing, the steel plate starts to cool down as soon as it touches the mold. Especially when it comes to the parts with depth, it can greatly affect the temperature difference. Compared to the hydraulic press, the speed of the strokes is much faster, which can reduce the temperature difference, stabilize the quality of the workpiece, and achieve the result of reducing defects.
In addition, the servo press can reduce power consumption by 25-50%, and reduce the operating costs. The hydraulic press will consume lots of energy at the BDC to produce the huge imposed stress. However, Manager Hsu said, “The servo presses produced by SEYI can reduce the load of the motor down to zero at the BDC.” The institution that keeps putting stress at the lower dead point is just like the elbow that sustains the joint. It can maintain its status without using the motors. When it is no longer in such status, the institution will reactivate the motors. 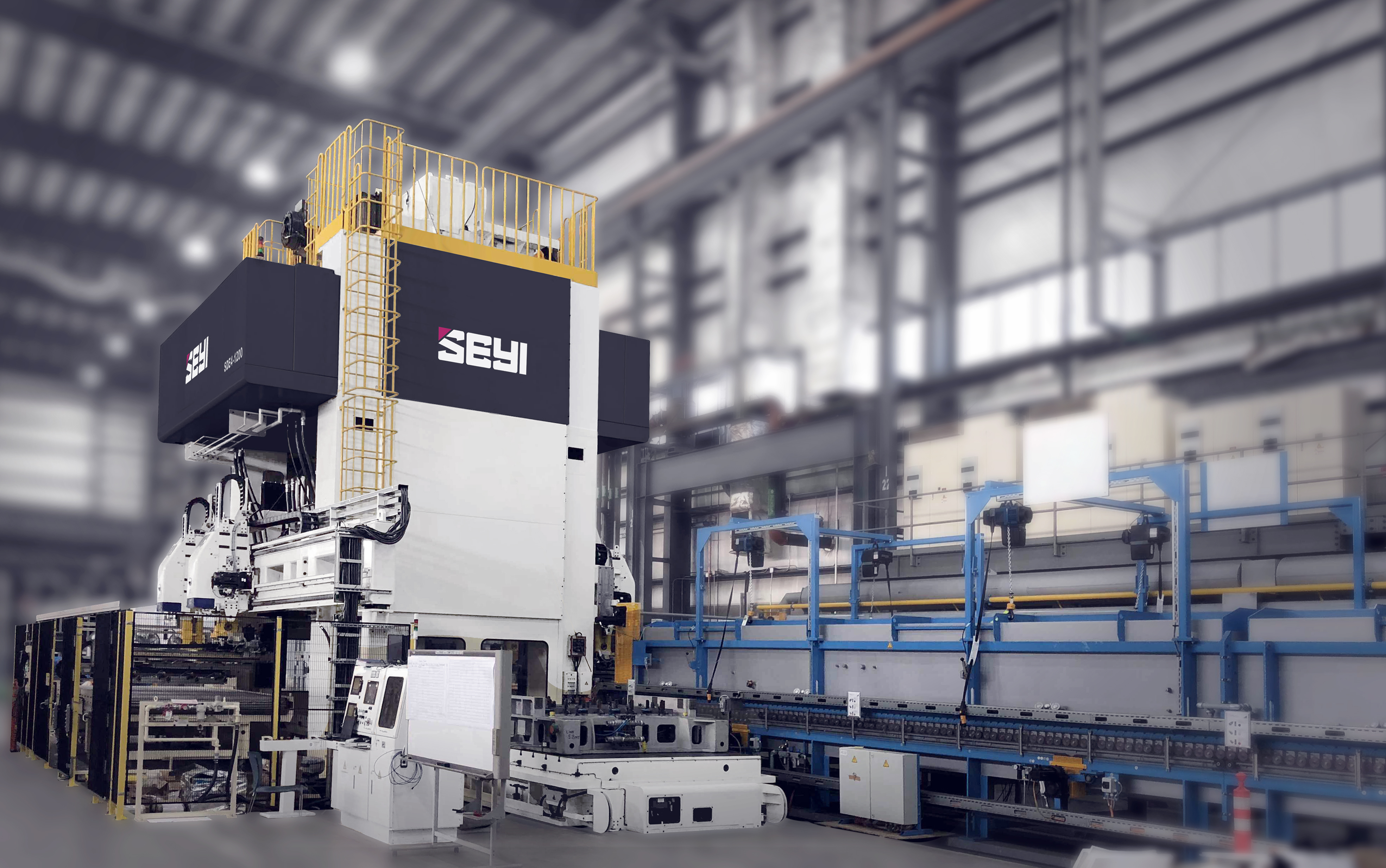 
SEYI launched the servo press in the global market for the very first time at the “MF-TOKYO 2011” in Tokyo Ariake in August 2011.  SEYI also joined the “MF-TOKYO 2019” from July 31 to August 3, 2019, this time. It’s the fifth exhibition that the Company has participated in since 2011. Obviously, the Company values Japanese market very much.


One of the highlights of the exhibition is the capacity of producing 200-ton servo presses to go with the special mold that can form 980MPa high-tension steel plates. It used to take several press machines to carry out the forming. The Company used one machine and one mold to execute the forming processing with an appeal to integrate the processing pass, improve efficiency, and the effectiveness of servo presses.

Another highlight is the digital Internet of Things (IoT) developed by SEYI since 2017. The Company developed the “SEYI Intelligent Manufacturing System (SIMS)” with a press-oriented idea to connect the molds, its peripheral devices, and other equipment so that it can maintain control of the status of machinery uptime and manage resumption in real-time. It can not only improve the production efficiency, but also avoid unexpected downtime when it is used for predictive maintenance. Additionally, corresponding to the far-end operations, it can do something like operating a press located in a foreign factory from the far-end factory based in Japan, carrying out the operations such as mold exchange and forming. The system can not only be connected to the corporate press, but can also be connected to tool machines to promote comprehensive intelligence in the factory. Currently, it has been used for testing in the factory located in the headquarters of Taoyuan Taiwan and the client end. The Company will arrange its sales based on the client’s needs. 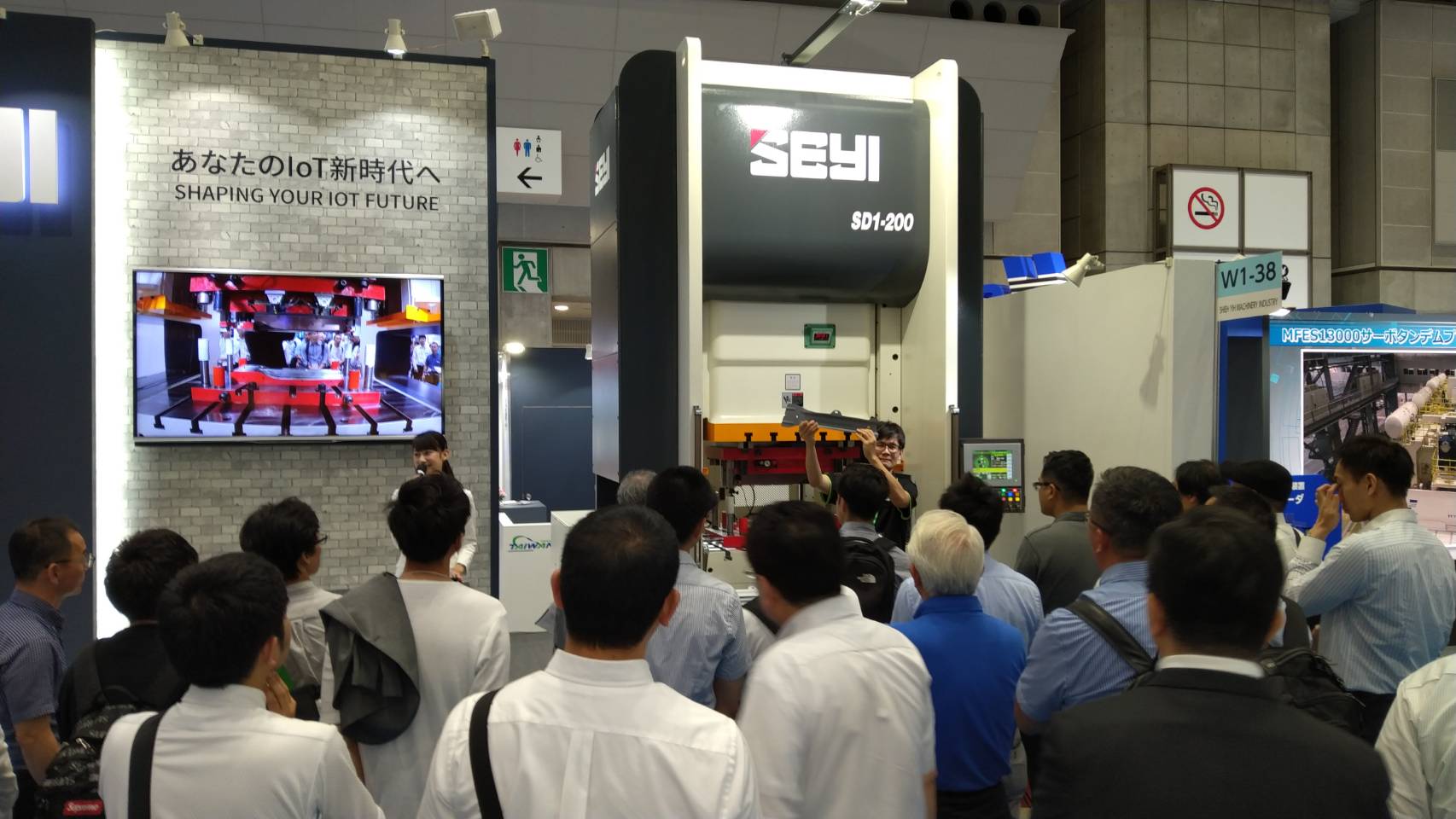 ● I’ve heard that your Company has launched a new building at the Taiwan headquarters.

“Since the company has recruited some staff for research and development positions, it has launched a new building as a measure to cover the insufficient space they found in the previous office.  Although the sales ratio of the electrical and electronic engineering industry was reduced, and the amount of clients decreased accordingly, we found the performance in the automobile industry, medical, and aerospace have increased a bit. However, we have transformed from single machine sales to providing solutions that include automation, peripheral devices, and other items to its clients, which also explains why we have hired more staff. ”

● Your Company has transformed the way it operates as a servo press manufacturer, featuring global branding within just one decade.

“The ratio of servo presses in Taiwan’s team that occupy its revenue was counted as 35% last year. It will reach 40% this year, and moves on to the development of press maximization. The 200 to 500-ton medium-sized press has become the center of its development including machines that weigh more than 1000 tons. It has a real achievement in plenty of sales cases. The one with the largest shipping capacity is the 2500-ton machinery press. Of course, the Company also received orders from Tier1 clients of Japanese automobile parts.”

● Your Company has dedicated itself to engaging in the hot forming of servo presses.

“The press is equipped with the unique servo motor, featuring several advantages such as the capacity, quality, and energy-saving. Including its clients from Japanese enterprises, they have achieved great performance in sales, needs, and inquiries. However, most of the orders they received have come from Europe. The clients from Europe know servo technology very well, and they have enough creativity to make use of the new materials. ”

● In September 2018, your Company launched the Europe Technical Service Center in Frankfurt Germany.

“We introduced the advantage of the servo press produced by SEYI to our clients via the real machine forming test and exchanged information with the local technical staff and clients from Europe to keep track of the industry trend. This is reflected in our product development. For example, when speaking of hot forming technology, Europe has plenty of technology innovations. It is noted that the information of technology innovations is equally important. ”

● In the 2012 corporate operating plan, your Company has jotted down a few points to set the goal of becoming one of the top 5 world manufacturers. In 2016, we asked you about the same question, and you gave a negative reply. Can you please tell us if you have reached the goal now?

“Although the evaluation should come from the customers, I think we have reached the goal technically in terms of the technology rather than the volume or scale. The clients chose to buy the presses produced by us, SEYI. It’s simply because they started to consider the technology rather than simply focusing on the Made-in-Taiwan products that offer them the affordable price. In the future, we will keep making progress so that the clients can agree that SEYI is a company featuring both technology and high-quality. ”

Chairman and CEO of Shieh Yih Machinery Claire Kuo’s father Sheng-Xiong Kuo founded the Shieh Yih Iron Factory in 1962 (former Machinery Industry Co. Ltd.). He became engaged in the business early. Featuring a client-oriented electrical and electronic engineering industry, the Company produced the press used for sales to grow its business and launched its over-the-counter stocks at the Taiwan Stock Exchange Corporation in 2002. Since Claire Kuo took office in 2009, the Company has started to focus on servo presses that serve the client base from the automobile industry to run its business. It has grown for the last few decades and has developed into a leading press manufacturer that can keep pace with the large manufacturers of presses.